These delicious cinnamon rolls are fast and easy and can be made just in time for breakfast! A Maple Sugar glaze makes them perfect. A soft homemade no-yeast roll with a brown sugar, cinnamon & butter filling. 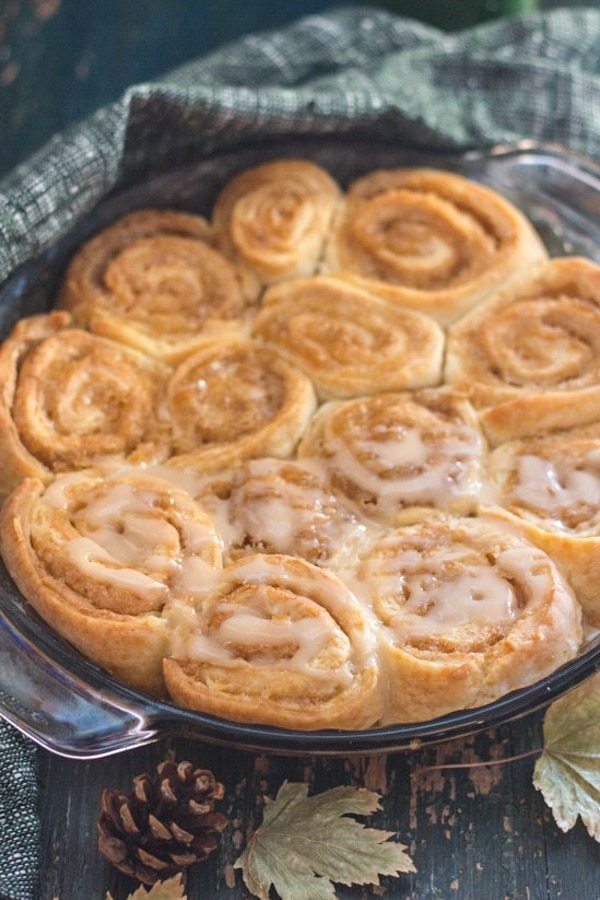 My mother was making these simple Cinnamon Rolls for as long as I can remember. They were a Friday night tradition.

And this is one of the first recipes that I shared with my husband and kids when I wanted to give them a taste of Canada.

My mother usually left them unglazed but because we love Maple Syrup and since Maple Syrup is so Canadian why not add a maple syrup glaze? It was the perfect addition.

How to make Easy Cinnamon Rolls 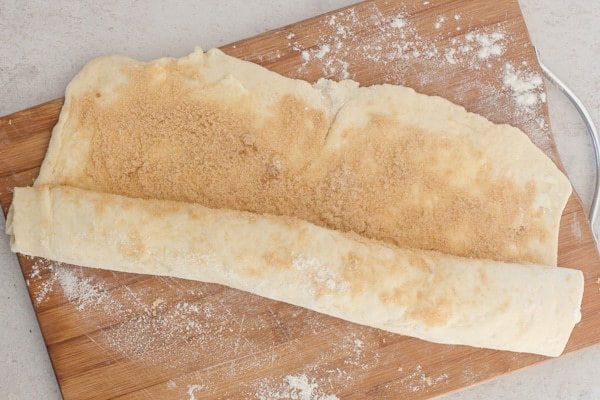 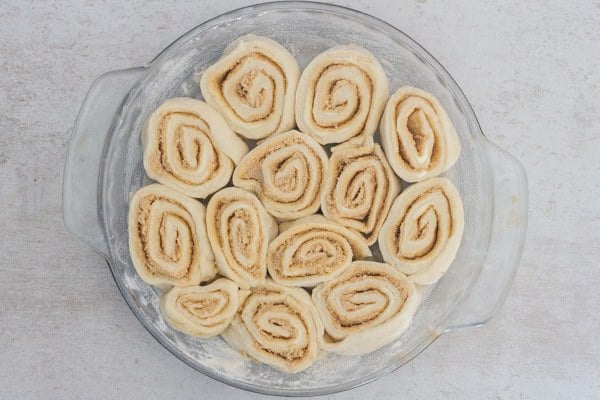 These are perfect for a special breakfast, but you don’t have time to wait for the yeast to rise. Simple, easy and very tasty Cinnamon Rolls.

And of course they are one of my favourites!

Cinnamon Rolls were apparently invented in Sweden. There is even a Cinnamon Roll National Holiday on October 4.

My mother used to make these almost every Friday night and they became one of our weekly food traditions! 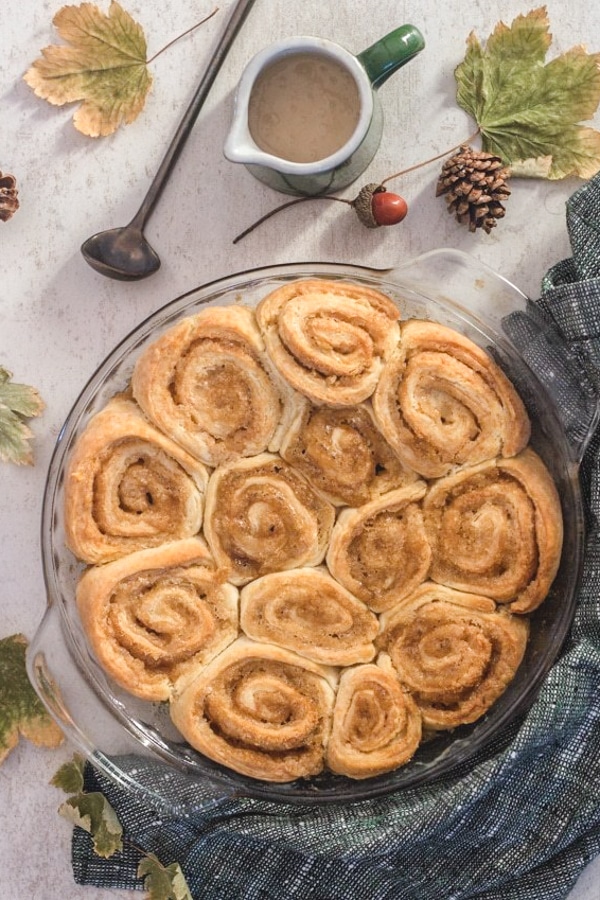 Is there a difference between Cinnamon Buns and Cinnamon Rolls?

There are a couple of differences between a Cinnamon Bun (or also known as a Sticky Bun) they both are usually made with a yeast dough that is rolled out and spread with butter, and usually cinnamon, sugar,  and sometimes nuts or raisins.

The dough is then rolled up and sliced. For the sticky buns, the baking dish is first lined with a few sticky ingredients, like brown sugar, honey, butter and usually nuts and or raisins.

Once they are baked, the pan is then inverted so that sticky bottom becomes the topping.

Whereas Cinnamon Rolls are placed in the prepared baking dish that has been lightly greased and floured and then baked. Once they have cooled they are then spread or drizzled with a powdered sugar glaze. 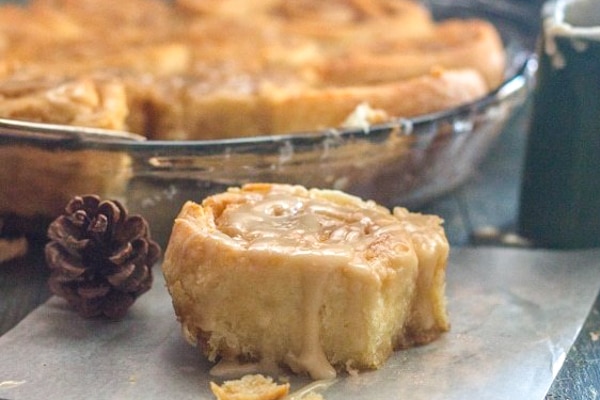 I firmly believe that you can never stop at one! At least we can’t. The Italian loves these so much they are always gone the same day I make them.

These cinnamon buns can also be made individually in a 12 medium size muffin pan.

How to store Cinnamon Rolls

I can’t imagine that they aren’t eaten in one day, but if you do have leftovers then be sure to store them in an airtight container or wrapped tightly in plastic. They will last up to two days at room temperature.

Thaw the cinnamon rolls in the fridge before baking. 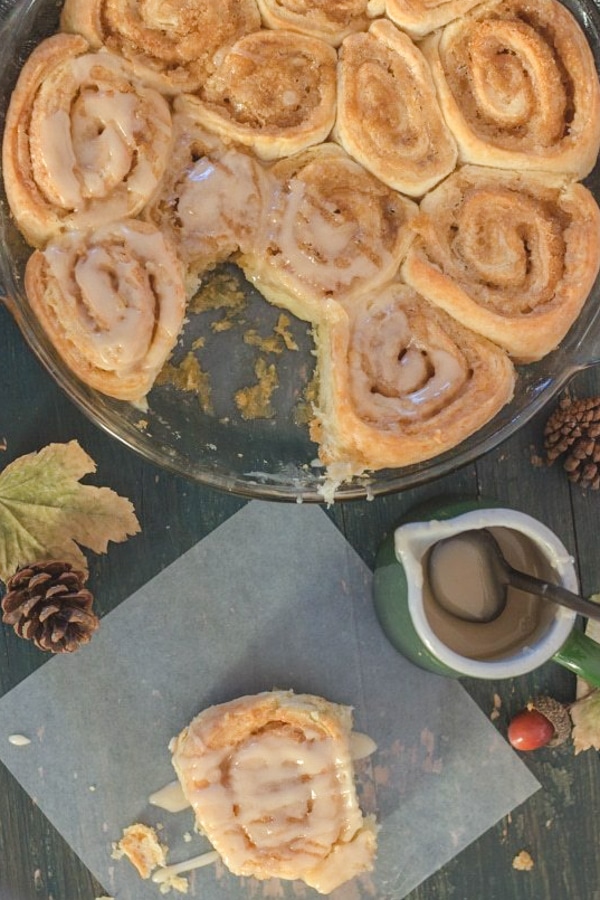 So if you like Cinnamon Rolls made with brown sugar, cinnamon and butter then I think you will love this easy recipe. Let me know what you think. Enjoy! 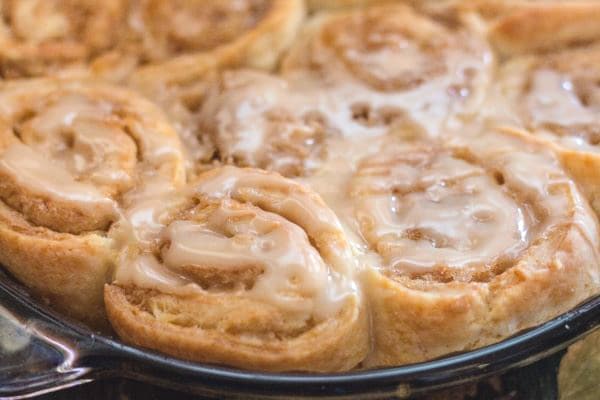 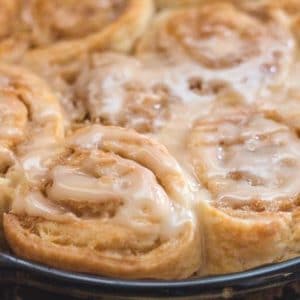 *I like to place the butter in the freezer 20 minutes before using, then grate it with a large hole grater, that way it is much easier to combine to make coarse crumbs. 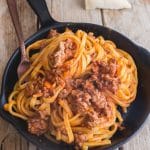